There’s something morbidly fascinating about serial killers, right? Why else would shows about solving crimes like NCIS, Criminal Minds and Broadchurch be so popular.

For the everyday individual, we wouldn’t dream of actually committing any of the heinous crimes we’re so fascinated by, but for some reason we just can’t look away.

Criminology professor Scott Bonn suggests that learning about crimes gives us a shot of adrenaline, and allows us to experience fear in a controlled environment. He goes as far as to suggest that real-story crime documentaries are to adults what monster movies are to children.

There are the few well known and widely discussed serial killers, like Jack the Ripper and Ted Bundy, but terrifyingly there have beenlots of other pretty twisted people out there too.

So, on that bright and cheery note, here are fourlesser-known but seriously terrifying serial killers for you to get your fix of monsters (lets just hope they’re not under your bed):

His story is the perfect plot for one of those ‘based on a truestory’ horror films. Hansen was a quiet husband, father and bakery owner. But it turned out he was also ridding his Alaskan town of sex workers, one by one.

Following a lot of female rejection as a teen, Hansen developed a deep seated hatred for women.

He confessed to killing seventeen women over a twelve year period, often taking them out into the wilderness, letting them loose, and hunting them down like wild animals.

He went undiscovered for many years until 1983, when Cindy Paulson was found with her hands in cuffs, claiming to have been abducted by a man who kidnapped her, took her back to his home where he tortured, abused and sexually assaulted her and even kept her chained by her neck to a post in his basement.

Not long after, police traced it back to Hansen, raided his home and found evidence linking him to the multiple missing women.

He was sentenced to 461 years in prison, and died in 2014. In 2o06 when Associated Press requested an interview with him, he said “I do not care so much for myself, but you journalist [sic] have hurt my family so very much,”

At the age of 10, Nelson’s pushbike collided with a car and he was unconscious for six days. When he awoke, it was recorded that his behavior became much more erratic, violent and he became prone to periods of memory loss.

He was committed to mental institutions several times before he turned 25, and he then embarked on a terrifying killing spree in early 1926. He killed at least 22 people, mostly by strangulation and his victims were often landladies from whom he rented rooms.

Most terrifying were the murders of Emily Paterson andLola Cowen. He had a penchant for hiding bodies under beds, and slept with the body of murdered 14-year-old Cowen under his bed for three days – despite having mutilated the body in a manner not dissimilar to Jack the Ripper.

Emily Paterson was a 27-year-old housewife, Nelson was able to get into her house while she was cleaning, brutally rape and murder her, and stash her under her own bed before fleeing the town.

She was discovered by her own husband as he knelt by their bed to pray for her safe return.

Nelson was eventually captured and a subsequent trial linked Nelson to 22 murders. There were many, many more very similar murders in the same areas but there was not enough evidence to link him to them.

He was found guilty and hanged at the age of twenty nine, in 1928.

Starting in the summer of 1929 and spanning a terrifying fifteen months, Krten’s murders held the city of Dusseldorf, Germany, gripped with terror. Hisvictims were regularly found brutally slashed, bludgeoned and sometimes even sexually assaulted and local sensationalist media portrayed him as the “Dusseldorf vampire”, claiming he found pleasure in drinking his victim’s blood.

Peter had a history of violence, going back to when he was only nine years old. He claimed to have pushed a friend off a raft as they played on the river Rhine. When another boy dived in to save him, young Krten held him under water until he suffocated. The two deaths were attributed to an unlucky accident and Peter was cleared of any blame.

His first murder is believed to be that of 10-year-old Christine Klein. While looking for somewhere to rob, he came across her asleep in bed he sexually assaulted and stabbed the young girl as her parents work in a pub below.

He told Dr Karl Berghis primary motive was one of sexual pleasure, explaining that itwas why the number of stab wounds varied between victims – because it sometimes took longer to achieveorgasm.

He claimed to have committed 79 criminal acts in total, but he was only found guilty of nine murders and seven attempted murders in total.

Hereceived 9 death sentences in total and was executed byguillotine on July 2, 1931, in Cologne, Germany. Before his death, he asked the prison psychiatrist:

“Tell me. After my head has been chopped off, will I still be able to hear, at least for a moment, the sound of my own blood gushing from the stump of my neck? That would be a pleasure to end all pleasures.

There was not enough evidence to convict David Parker Ray of a single murder, but he has been linked to over 60 deaths.

He spent $100,000 in total renovating a motorhome and turning it into his ‘toybox’, a transportable torture chamber for his victims. It included a gynecologist chair, whips, saws, pulleys and an electric cattleprod.

Upon waking in the terrifying room, victims would be greeted by a chilling tape recorded by Ray, which began “Hello there bitch. Are you comfortable right now? I doubt it.”

It goes on to detail the months of torture the victim would live through and what they can expect during their time with Ray and his female accomplice, believed to be his daughter.

“We are very selective when we snatch a girl to use for these purposes. It goes without saying you have a fine body, and you’reprobablyyoung. Maybevery young.

We snatch girls in the early to mid teens,sexually developed but still small bodied. Scared sh*tless, easy to handle and easy to train.And they usually have tight little p*ssies and a**holes.”

As a general rule, however, Ray didn’t like to kill his victims.

Instead, he preferred to drug most of them with a dangerous cocktail ofsodium pentothal and phenobarbitol, which enabled him to mess with his victim’spsychological state enough to convince them that everything they experienced either didn’t happen or was a nightmare, and release them back into the world.

He was only discovered when one of his victims managed to escape and go to police in 1999. Other victims then came forward, admitting that until then they had mistaken their horrifying memories for night terrors and hallucinations.

Listen to the transcript of his chilling tape here:

Creepy, right? Let us know what you think in the comments.

God I hate signs. Telling you to do things or warning you of other things. Where do they get off?! Sometimes I just want to go over to one of them and write some funny remark that sort of correlates to the subject of the sign and post it to the internet?

Anyone feel like that? Apparently some of you do. At least 24 (assuming the same people didn’t strike more than once), in fact…

1. Got that guy by the window on the lookout for you

2. Even with “probably” instead of “baby”, what is that an advert for?

3. I had Batman down for conservative

4.Facilities need to throw a comma in there…

5. If CCTV actually looked like that, the world would be a friendlier place.

6. Scarface can sell me drinks any day

8. Getting flashbacks over here. Call the police.

10. They could have at least given the other guy some claws…

15. Did someone graffiti the light?

18. Handy because it would calm down someone in need of the emergency door…

19. How can I make this place more suitable for my date?

20. People placing sticky notes on it.

21. Ah clever but, seriously, get your prostate checked out.

22. Aerosmith and their signs, eh?

23. But leave anarchy out of the fridge for a bit so it doesn’t clump up on your toast.

What was your favourite? Let us know in the comments!

Its really annoying when your iPhone decides that is has no storage left. Youre trying to take a selfie with the dog because its pulling funny aces and you have to go through the inconvenience of deciding which photos to delete to free up some room.

Well, thanks to a reddit thread there is now a way to increase your storage and I can confirm that this actually works. I tried this just now and freed up half a GB.

Activating it is really easy. Go to Settings General About and check your available storage.

Then go to iTunes and try rent something really big like Lord of The Rings or The Hobbit. 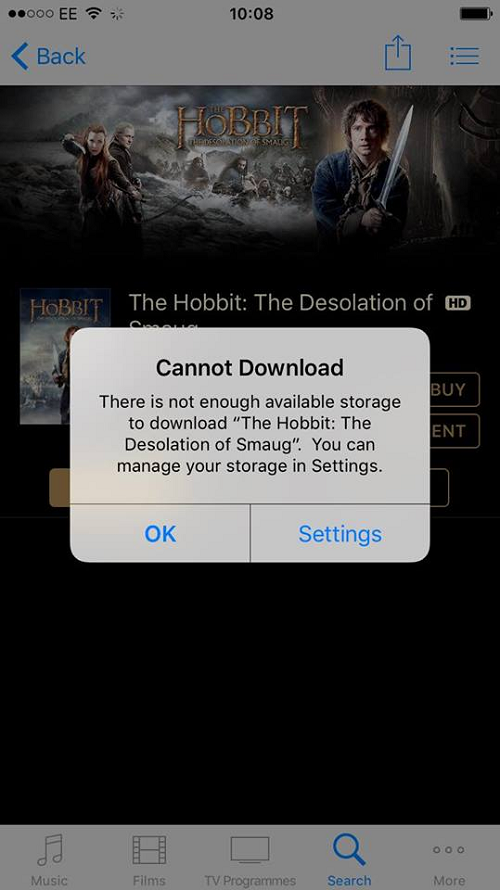 iTunes will try downloading it and then youll get a pop up saying that you dont have enough space.

Then something wizardry happens and certain apps will appear as cleaning.

Then when you return to your available storage the available space will have grown. The more you try rent the film, the more space becomes available. I just tried it a second time and gained another half a gig.

Im out of here, there are so many selfies with my dog that need to be taken.

It’s been over two years since Breaking Bad wrapped up, and we’ve yet to see another TV show become such a stunning cultural phenomenon.

Telling the story of a mild-mannered chemistry teacher “breaking bad” and – over the course of five seasons – becoming a stony-faced, pretty ruthlesskiller, Vince Gilligan’s show has its fair share of dedicated fans, and it seems that Aaron Paul (aka Jesse Pinkman) is one of them.

In an interview intended to promote his two new movies (Triple 9 and Eye in the Sky) and his latest TV role (in Hulu’s powerful cult drama, The Path) the conversation quickly turned to Paul’s most iconic role:

“I absolutely feel like I said goodbye to Jesse, and it might sound a little cheesy, but I think Jesse will always live somewhere within me.

Im the only person on the planet that lived and breathed every moment of Jesses existence, and then some. Every moment that we saw, I created in my crazy head. I loved Jesse. I feel so connected to him.

Unprompted, he then hinted that Jesse Pinkman might one day be back:

“I absolutely feel like I said goodbye to him, for now. Because he could always come back in one way or another.

Maybe this is just wishful thinking (on our part as well as on Aaron’s), but there have been a few hints that Pinkman could be back. Rumours are flying that he’ll cameo in Breaking Bad prequel, Better Call Saul, and Vince Gilligan has also entertained the possibility that another spin-off – this time focused on Jesse – could one day be on the cards…

We’ll have to wait andsee. In the meantime, remind yourself of Jesse’s best bits with this incredible fan video, dedicated to the relationship between him and Walt: