UN ambassador Samantha Power traveled to the Central African Republic on Thursday to pledge U.S. support for ending the deadly sectarian violence that has killed and displaced thousands, including an estimated 1,000 people in just the last two days.

In conjunction with her trip, the White House announced it would provide $101 million to “restoring security” in CAR, in addition to another $15 million in humanitarian assistance. The White House also echoed Powers’ call for accountability for the perpetuators of atrocities.

CAR, population of 4.5 million, has been descending into chaos since March, when Seleka Muslim rebels ousted President François Bozizé, and Seleka rebel commander Michel Djotodia took over command. Under Djotodia’s watch, Seleka rebels attacked political opponents and Christian communities, who are the majority. Many Christian villages then formed their own militias, called the anti-balaka (meaning anti-machete), in response to the aggressions.

Displaced refugees in a camp in the capital Bangui. Stringer / Reuters

Since September, the violence by both sides has escalated at a startling rate. Human Rights Watch has reported on the atrocities committed by Christian militias against Muslim communities in the north, where anti-balaka have killed several hundred Muslims and razed their homes. In response, Seleka forces attacked Christian neighbors, killing an unverified number and setting fire to their homes and fields.

The UN reports that the conflict has now affected 2.5 million children, while as many as 6,000 children have been recruited into armed groups. More than half a million people have been displaced. News reports have documented horrific reports of mass slaughter and rape, sounding alarm that the fighting could soon become a genocide. Latest reports estimate that on average three people were killed every hour during the second week of December. An estimated 1.6 million are in dire need of immediate food, water, health care, and other humanitarian assistance, according to the International Rescue Committee.

Earlier this month the UN authorized deployment of African and French forces in CAR. The Security Council also voted to impose an arms embargo. CAR has been plagued by poverty and a series of coups, mutinies, and conflicts since gaining independence from France in 1960. The latest influx of international forces has not been able to stem the violence.

Men line up for petrol as resources have grown scarce. Stringer / Reuters

French soldiers carry their weapons as they patrol in the capital, Bangui. Stringer / Reuters

Samantha Power has been a strong advocate for US involvement in international conflicts in the past. She was an early backer of US intervention in the 1994 Rwanda genocide . While the US has few direct political interests in CAR, analysts say that Power has focused on the fighting because of the conflict’s interconnections with neighboring Rwanda. Many of the Seleka rebels also come from neighboring Chad and Sudan.

On Twitter, human rights activists thanked Power for making the trip, her first solo trip abroad since assuming the ambassadorship.

As a human rights activist, wonderful 4 me 2 see @AmbassadorPower go 2 the #CARcrisis to show personal commitment to preventing atrocities.

Whether declared a genocide or not, the repercussions in CAR will be felt for generations to come. 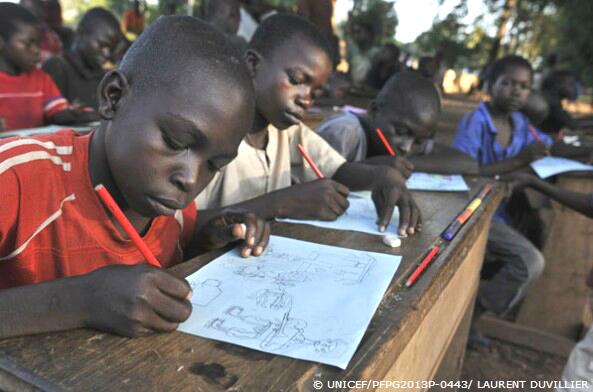