1. There were only two explosive devices: the two that went off at the marathon’s finish line. No unexploded devices were found. Bureau of Alcohol, Tobacco, Firearms and Explosives (ATF) Agent Gene Marquez confirmed the presence of two devices and called rumors of more devices “not true” in a press briefing Tuesday morning.

3. There were 176 people who went to area hospitals after the bombs exploded. Seventeen are in critical condition.

4. “A variety of sharp objects,” including nails, have been removed from the skin of injured victims in addition to environmental debris. Doctors believe these sharp objects were implanted in the explosive devices. The doctors elaborated on the (gruesome) injuries they’ve seen since the bombings in a press briefing today.

5. The FBI forensic evidence recovery team discovered pieces of black nylon — which could be from a backpack — and what appear to be fragments of BBs and nails possibly contained in a pressure cooker device at the crime scene. All evidence is being sent to the FBI laboratory in Quantico, Virginia.

6. Prior to detonation, the explosive devices had been placed in black nylon bags and made to resemble discarded property. One of the devices was apparently placed in a metal pressure cooker (a metal kitchen pot with a locked-down top). The FBI has released crime scene photos of one of the bombs.

7. Boston police do not have a suspect in custody.

8. The Saudi national who was reported to be a suspect yesterday is in fact a witness who sustained serious injuries in the attack. The young man, a student at a university in the Boston area, volunteered to have his apartment searched and is fully cooperating with police.

9. Two bomb sweeps were made prior to the marathon’s start.

10. The FBI has taken over the investigation, which they are describing as a “worldwide investigation.” They are following a number of leads.

11. The Department of Justice doesn’t know yet if the attack was carried out by an individual or a group (foreign or domestic). A multi-agency investigation has been established in Boston through the Boston Joint Terrorism Task Force.

13. There are no known additional imminent threats.

14. Nobody has claimed responsibility for the attack.

15. President Obama will visit Boston on Thursday to lend support to the bombing victims.

3. As it happened: detailed live updates are posted below.

If you want to know anything more about the points mentioned above.

5. UPDATE – 11:28 a.m.: The Central Terminal of NYC’s LaGuardia Airport was evacuated after a suspicious package was reported. 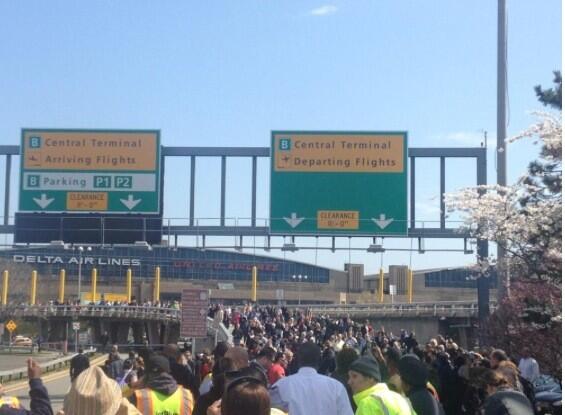 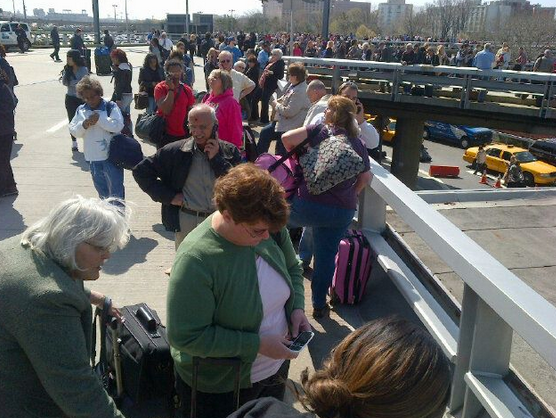 7. After an investigation, passengers were allowed back into the building.

All Clear at Laguardia Airport. Passengers being allowed back in now. @nbcnewyork.

According to Port Authority Public Affairs, the suspicious package at LaGuardia turned out to be a lighting ballast with wires sticking out.

“This was a heinous and cowardly act and given what we know the FBI is investigating it as an act of terrorism.” Correction: An earlier version of this post featured yesterday’s statement from Obama. It has since been updated with today’s statement.

“Good morning, everybody. I’ve just been briefed by my national security team, including FBI Director Mueller, Attorney General Holder, Secretary Napolitano, and my counterterrorism and homeland security adviser Lisa Monaco, on the attacks in Boston. We continue to mobilize and deploy all appropriate law enforcement resources to protect our citizens and investigate and to respond to this attack. Obviously, our first thoughts this morning are with the victims, their families, and the city of Boston.

We know that two explosions gravely wounded dozens of Americans and took the lives of others, including an 8-year-old boy. This was a heinous and cowardly act. And given what we now know about what took place, the FBI is investigating it as an act of terrorism. Any time bombs are used to target innocent civilians, it is an act of terror. What we don’t yet know, however, is who carried out this attack or why, whether it was planned and executed by a terrorist organization, foreign or domestic, or was the act of a malevolent individual. That’s what we don’t yet know. And clearly, we’re at the beginning of our investigation. It will take time to follow every lead and determine what happened, but we will find out. We will find whoever harmed our citizens, and we will bring them to justice.

We also know this: The American people refuse to be terrorized, because what the world saw yesterday in the aftermath of the explosions were stories of heroism and kindness and generosity and love, exhausted runners who kept running to the nearest hospital to give blood and those who stayed to tend to the wounded, some tearing off their own clothes to make tourniquets, the first responders who ran into the chaos to save lives, the men and women who are still treating the wounded at some of the best hospitals in the world, and the medical students who hurried to help, saying, ‘When we heard, we all came in,’ the priests who opened their churches and ministered to the hurt and the fearful, and the good people of Boston who opened their homes to the victims of this attack and those shaken by it. So if you want to know who we are, what America is, how we respond to evil, that’s it: selflessly, compassionately, unafraid.

In the coming days, we will pursue every effort to get to the bottom of what happened, and we will continue to remain vigilant. I’ve directed my administration to take appropriate security measures to protect the American people, and this is a good time for all of us to remember that we all have a part to play in alerting authorities. If you see something suspicious, speak up. I have extraordinary confidence in the men and women of the FBI, the Boston Police Department, and the other agencies that responded so heroically and effectively in the aftermath of yesterday’s events. I’m very grateful for the leadership of Governor Patrick and Mayor Menino, and I know that even as we protect our people and aggressively pursue this investigation, the people of Boston will continue to respond in the same proud and heroic way that they have thus far. And their fellow Americans will be right there with them.

Thank you very much. And you can expect further briefings from our law enforcement officials as the day goes on. When we have more details, they will be disclosed. What I’ve indicated to you is what we now know. We know it was bombs that were set off. We know that, obviously, they did some severe damage. We do not know who did them. We do not know whether this was an act of an organization or an individual or individuals. We don’t have a sense of motive yet. So everything else at this point is speculation. But as we receive more information, as the FBI has more information, as our counterterrorism teams have more information, we will make sure to keep you and the American people posted. All right? Thank you very much, everybody.”

12. UPDATE – 11:51 a.m.: Boston’s Logan International Airport posts a statement about a plane that was grounded earlier this morning. 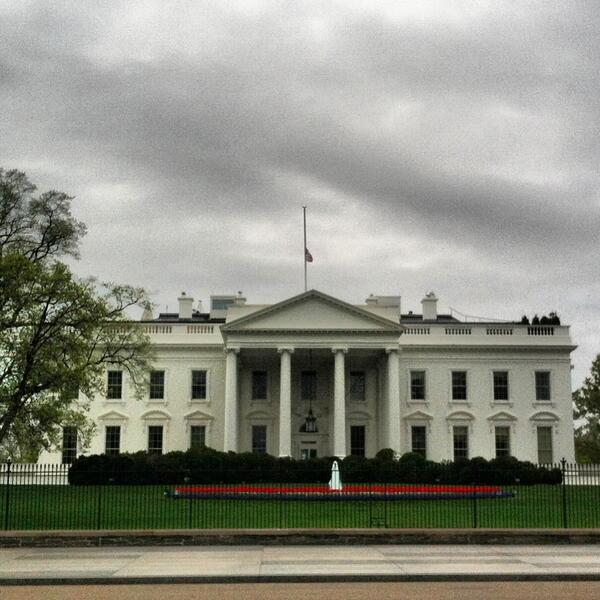 White House flag now at half staff through April 20. #Boston

A law enforcement source told CBS News that one of the explosive devices appears to have been placed in a metal pressure cooker (a metal kitchen pot with a locked down top) which had been placed in a black nylon bag or backpack. Investigators also found pieces of an electronic circuit board possibly indicating a timer was used in the detonation of the bomb.

A law enforcement official told CBS News that the two bombs that exploded were made to look like discarded property. It is still unknown if one or both bombs were in garbage cans. One may have been on the sidewalk.

The bombs were described as “low explosive,” but with “anti-personnel” packing. This is consistent with doctors reporting shrapnel pulled from victims. The official said there were apparently things like BB’s, ball bearings and nails in the bombs.

While the explosions were fairly large, the bombs were made of “low explosives,” the official said. Right now bomb experts do not think that plastic explosives were involved.

16. UPDATE – 12:30 p.m.: The Washington Post says that the injured Saudi man reported as a suspect yesterday is in fact a witness.

Injured Saudi is a witness, not a suspect, in Boston bombing http://t.co/rKNKaW3BBs

17. The Washington Post reports that the young man volunteered to let police search his apartment:

U.S. law enforcement officials said Tuesday that a Saudi national injured in the Boston Marathon bombing is regarded as a witness, not a suspect.

The Saudi, who is recuperating at a Boston hospital, is in his 20s and is in the United States on a Saudi scholarship to study at a university in the Boston area.

Inside Medford first reported the story:

A 29-year-old Medford woman is one of the three victims who was killed on Monday in the bomb attacks at the Boston Marathon.

The woman, another victim, and 8-year-old Martin Richard of Dorchester were killed.

“My daughter was the most lovable girl. She helped everybody and I’m just so shocked right now. We’re just devastated,” he said. “She was a wonderful, wonderful girl. Always willing to lend a hand.”

19. BuzzFeed spoke with one of Krystle’s friends, who described her as an “angel” and “a beautiful person.”

20. UPDATE – 2:14 p.m.: The White House has released another photo of President Obama at a briefing on the bombings.

“Although it is not yet clear who executed this attack, whether it was an individual or group, or whether it was carried out with support or involvement from a terrorist organization – either foreign or domestic – we will not rest until the perpetrators are brought to justice. The FBI is spearheading a multi-agency investigation through the Boston Joint Terrorism Task Force.”

22. UPDATE – 3:55 p.m.: Vice President Biden spoke to a reporter on Capitol Hill about the bombings.

Biden moments ago on Hill: “We’re going to get to the bottom of this. We don’t have any hard information yet.”

Biden moments ago on Hill: “But I can assure we will find out who did it and bring them to justice.”

When asked whether he has any sense whether the attack in Boston was domestic or foreign-born, Biden: “not yet”

25. UPDATE – 4:40 p.m.: Martin Richard’s school has posted a statement about his tragic death.

26. UPDATE – 4:44 p.m.: The Executive Director of the Boston Athletic Association has posted a message on the Boston Marathon Facebook page.

27. UPDATE – 5:10 p.m.: Homeland Security Secretary Napolitano states that there is “no indication” that the bombings were part of a “broader plot.”

“Yesterday afternoon, two explosive devices detonated in Boston, Mass., killing three and wounding over 150 people. We continue to keep those affected by this tragedy in our thoughts and prayers, especially the families and loved ones of those lost or injured.

While there is no current indication to suggest that the events in Boston are indicative of a broader plot, out of an abundance of caution, DHS continues to keep in place enhanced security measures at transportation hubs, utilizing measures both seen and unseen. We continue to urge the American public to remain vigilant and immediately report any signs of suspicious activity to local law enforcement officials.”

29. UPDATE – 5:49 p.m.: The third victim was a graduate student at Boston University, according to a statement from the school. The student’s name has not yet been released.