Astronomers have finally discovered the cause behind the mysterious X-ray emission that waspreviously observed near the center of the Andromeda galaxy.

It turns out that the high-energy emission is a pulsartheincredibly dense core of a dead star left over by a supernova. This pulsar, known as Swift J0042.6+4112, is not a common one: It is highly magnetized, spins very fast, and steals material from a companion star.

As reported in the Astrophysical Journal, these characteristics combined to create a powerful emission, and while the object has been known for years, only observations with NASAs NuSTAR (Nuclear Spectroscopic Telescope Array) couldfinally crack the mystery.

“We didn’t know what it was until we looked at it with NuSTAR,” lead author Mihoko Yukita, from Johns Hopkins University in Baltimore, said in a statement.

The object is brighter than all theother black holes in Andromeda combined, even brighter than its supermassive black hole (which is in a quiet phase). This had scientists scratching their heads to work out what it was. Most people thought it wasa particularly voracious black hole having a feeding frenzy.

Pulsars are not usually this bright, as they are significantly smaller than black holes. Given the right conditions,an individual pulsarmight be brighter than an individual black hole, but outshining all of them was anunexpected finding. 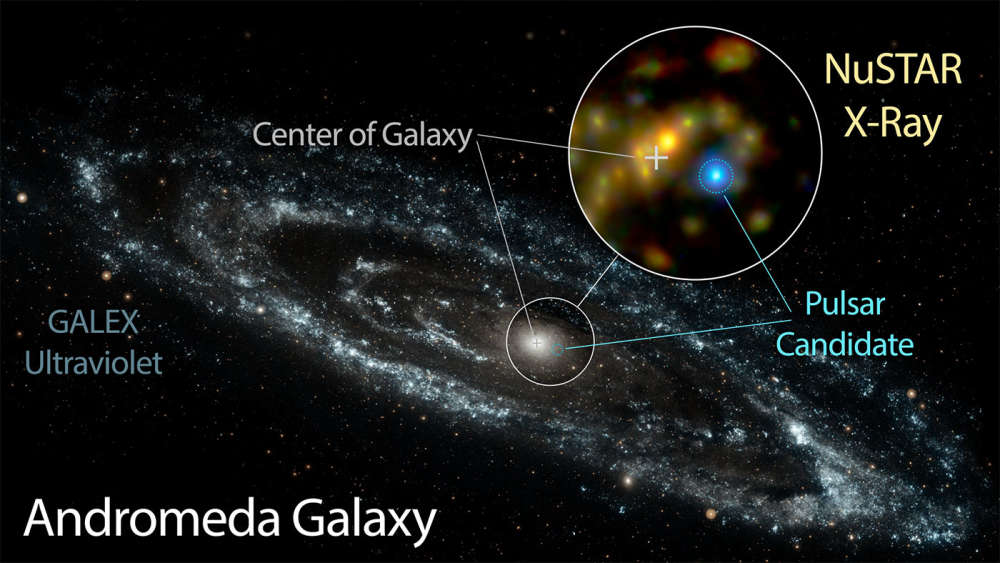 Location and view of the powerful pulsar Swift J0042.6+4112. NASA/JPL-Caltech/GSFC/JHU

“NuSTAR has made us realize the general importance of pulsar systems as X-ray-emitting components of galaxies, and the possibility that the high-energy X-ray light of Andromeda is dominated by a single pulsar system only adds to this emerging picture,” co-author Ann Hornschemeier, from NASA’s Goddard Space Flight Center, added.

Andromeda is seen as the Milky Way’s big sister. It is just 2.5 million light-years away, a throw of a stone in cosmic terms, and slightly bigger. Understanding Andromeda helpsus understand our galaxy.

“Since we can’t get outside our galaxy and study it in an unbiased way, Andromeda is the closest thing we have to looking in a mirror,” Hornschemeier said.