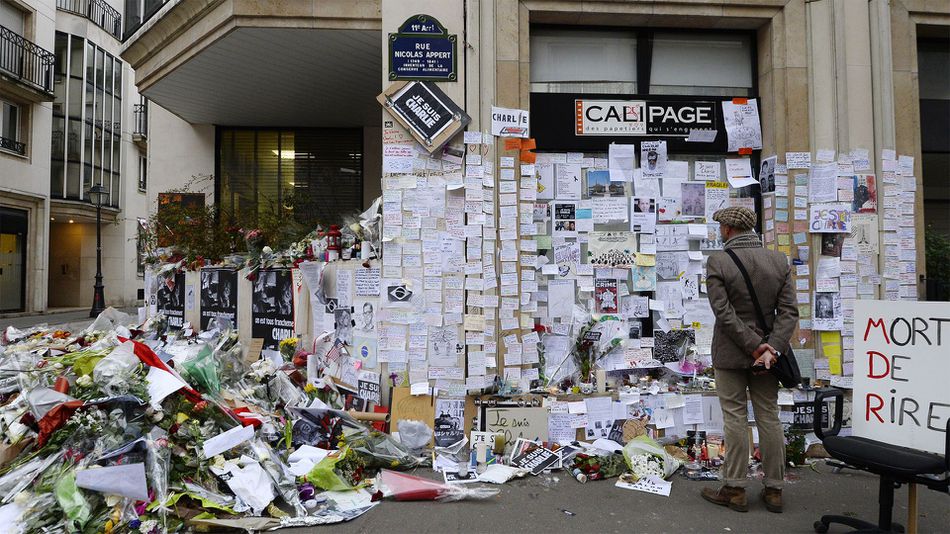 People visit a makeshift memorial near the headquarters of the French satirical weekly Charlie Hebdo on January 12, 2015 in Paris in tribute to the 17 victims of a three-day killing spree by homegrown Islamists.
Image: JOEL SAGET/AFP

A cartoon of the Prophet Muhammad shedding a tear and holding a “Je Suis Charlie” sign will be featured on the cover of Charlie Hebdo‘s next issue according to French newspaper Liberation, which is helping to print the issue.

Above the cartoon, the powerful message: “All is forgiven.” The magazine is also planning to print 3 million copies.

Liberation said this issue is ready for printing and will hit newsstands on Wednesday, Jan. 14. The issue is the first for the weekly satirical magazine since two gunmen stormed Charlie Hebdo offices in Paris on Jan 7. Twelve people were killed, including two policemen, by brothers Cherif and Said Kouachi.

The new cover was drawn by Renald Luzier, also known as Luz, a French cartoonist who has been working for Charlie Hebdo for years. He told the Telegraph earlier in the week that working on the issue was helping the surviving members of staff cope with the tragedy.

“We’re getting by. We are having less nightmares. We are trying to put a magazine together and find some calm and inspiration, it’s not easy,” said Luzier. “We are down to a skeleton staff since last Wednesday as you might have noticed but we’ll try our best.”

The magazine had long been known for its controversial depictions of the Prophet Muhammad and its raw and unapologetic satirical cartoons that lambasted religion across the board.

Immediately after the attack, the staff vowed that the satirical publication would live on, and financial help has poured in to help make that a reality. The French government even pledged €1 million (about $1.2 million) to keep the magazine afloat. “Je Suis Charlie” has become a rallying cry internationally for those supporting freedom of the press in the wake of the brutal attack, so the cover comes as no surprise.

The shooting at the magazine office was just the beginning of three days of terror and uncertainty in France, after the men fled the scene of the Charlie Hebdo attack. On Jan. 10, another gunman, Amedy Coulibaly shot dead a policewoman in the Paris neighborhood of Montrouge in a linked attack.

Then on Friday, the Kouachi brothers took one person hostage before being killed in a police standoff. Simultaneously, Coulibaly was killed by police after storming a kosher market in Paris, where he killed four people and held several others hostage.